An anniversary present for customers and fans. 20 years of AARON amplifiers.

Today, Thomas Höhne, founder of the High End Manufacture in Elze, surprised music lovers and fans of the AARON High End amplifiers: On the occasion of the company’s anniversary, as to the 20th birthday of the AARON amplifiers, there will be a birthday type brought on the market in Elze in Lower Saxony. A real High End integrated amplifier for only 2,000 EURO.

The new integrated amplifier called „XX“(spoken: „Double X“) will be available at selected traders and High End consultants from September.

With two times 80 Watt at 8 Ohm and two times 140 Watt at 4 Ohm speakers, the amplifier will ensure the powerful and precise playback of its owner's favorite music. However , as Thomas Höhne promises, the new High End creation does not only meet the high expectations concerning musical quality, but also the design as well as the build quality of the XX will make the hearts of AARON-Fans beat a little bit faster.

According to Hoehne, the price of 2,000 EUR for the amplifier, which is produced only in Western Europe, will shock far eastern competitors: „We are very proud that we are able to design and produce devices of this quality in the middle of Europe. We would like to maintain this level of quality for the next 20 years. “

If you would like to put a 100 EURO note on your trusted Hi-Fi-salesman’s counter twenty times, you can contact High End in Elze already. Call +49-5068-2858 to get information by telephone. Of course, queries of advance orders via e-mail will be answered as well.

La legendaria firma Audio Control acaba de lanzar un interesante receptor AV con la ultima tecnología ne procesamiento.
The Concert AVR-1 is AudioControl’s new surround sound receiver/controller designed to be a premium product that reflects refined styling, maximum flexibility and optimum performance for home theater enthusiasts. The high gloss of the front panel is complimented by the striking blue LED display and custom designed trim bezel. Power levels of the Concert AVR-1 are confirmed when one admires the hefty, gold plated, high current 5-way binding posts. One hundred twenty individual Input and Output connectors for video and audio connections confirm that the intention of the AVR-1 is to be the intellect of any theater system.
Designed to offer maximum system flexibility matched with advanced technology, the Concert AVR-1 supports the latest surround codex’s of Dolby True HD and DTS-HD Master along with traditional formats of Dolby Digital and DTS High Resolution. Raising the bar even more, the AVR-1 accepts signals from up to five discrete high bandwidth (1080p) HDMI inputs. The dual HDMI outputs are then assignable by the integrator to allow for priority switching via the display device. Component, composite and S-Video signals are also automatically upconverted and scaled to their maximum potential resolutions. To properly complete the signal path, the Concert AVR-1 utilizes AudioControl’s legendary Class H amplifier topology to powerfully drive even the most demanding speaker systems. Known for pristine sonics, cool operating
temperatures, and ultra reliability, this highly efficient design literally “sips” current, which helps it to satisfy even the “greenest” of customers. Despite it’s minimal current draw, the Class H design is powerful enough to drive 120 watts per channel (840 watts total), with all channels being driven into 8 ohms. The AVR-1 also has the additional ability of driving into lower impedance’s when necessary. In recent years AudioControl amplifiers have received a number of awards and accolades from listeners that confirm the high performance levels of Class H.
Publicado martes, julio 14, 2009 No hay comentarios: 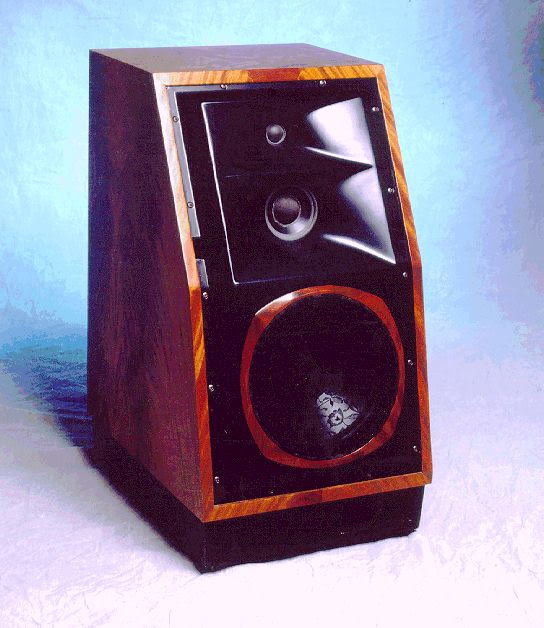 PM is a three-way loudspeaker system which I started to develop in the mid-seventies. The goal was to construct a loudspeaker that was able to reproduce the real acoustic environment from the recording. Discussions about time-delay in those years, which were confirmed by measurements, led me to a design with a complex baffle and exponential horns. Later on I've made fibreglass moulds for casting the baffle in concrete. The sound from this loudspeaker is something you must experience. It really is competitive with the "big" names on the hi-fi scene.
The PM loudspeaker is a three-way system with a 10" Peerless CC-line woofer, a 4.5" Peerless midrange, and a 1" Peerless soft-dome tweeter. The midrange and the tweeter are mounted at the back of the baffle in exponential horns with machine screws and nuts in the cast concrete. The woofer is mounted in the same way at the front of the baffle. The baffle is designed to produce low diffraction effects and to have a nice appearence, and care is taken to handle the time-delay between the midrange and the tweeter. The exponential horn, especially for the tweeter, works as an acoustic transformer, and the benefit of using it in the design is that, when you compensate for the amplification of the horn in the filter, you also lower the distortion. The use of the horn loading also allows you to place the treble in the correct time-delay plane. The effect of the midrange horn is not as good as for the treble in my design, because of the impossibility of integrating a horn of the full required size that would be needed in the PM's baffle. I had to compromize in that matter, as in the matter of the amount of time delay between the woofer and the midrange. I shifted the polarity of the woofer instead so that I came up with a time delay error corresponding to only a few centimeters in distance.
The concrete baffle is mounted in the enclosure with wooden sqrews so that you can change a driverif anything should happen. The design of the baffle was quite a drawing and calculating experiencein the mid-seventies, as in those days I only had a pocket-calculator at my disposal. The design involved both calculatingexponential curves and geometric drawings to get the right angles of the drivers to make themcoincide at a proper listening distance. But the design really was correct, which I found out later when I started measuring the PM's acoustic responce. The slope of the baffle also places the sound "image" at a good height even though the loudspeaker is not very tall.
The enclosure is made of veneered 16 mm MDF exept for the bottom and the back of the enclosure.These pieces are made of 22 mm veneered birch-plywood. The veneer used for the enclosure in the picture on the homepage is called pyramid-mahogany. I've also veneered in birds-eye maple, padoc, American walnut, ash, Nordic pine, cherry and some others. It all depends on each person's individual taste.
The bass vent is tuned to about 25 Hz. The midrange has a separate chamber that is also vented. The midrange vents come out in the front at both sides of the baffle. The bass vent is placed in the enclosure base where the crossover filter also resides.
Both the woofer and the midrange are acousticly damped; that is, you put the damping material at the back of the driver basket. This is a damping method that is not commonly used, but it is recommended by, for example, Doctor R.H. Small. Adding this type of damping allows you to adjust the driver Thiele-Small parameters. The PM's outside dimensions are: W = 37.5 cm, H = 71 cm (including Sonic Design damping feet which I use to minimize vibrations in the enclosure) and Depth = about 48 cm.
The crossover filter used in the PM's includes CFAC inductors in series with the woofer and midrange, and MIT capacitors in series with the treble. The other elements in the filter are polypropylen capacitors and non-inductive resistors. The crossover frequency between the mid and treble is roughly 4000 Hz with a 6 dB/octave slope on the treble and 6-12 dB lowpass slope on the midrange. The woofer-midrange crossover is at about 400 Hz and uses filters with 6-12 dB/octave slopes. In the 6-12 dB/octave filters you start with a 6 dB/octave filter and then you cut 6 dB/octave more at about one octave higher (or lower). The filter is hard-wired. The filter construction is computer optimized using the CALSOD software package and fine-tuned by listening. Special attention has been paid to the impedance responce to produce a "nice" load for tube amplifiers.
The PM loudspeakers was tested in a Swedish magazine about two years ago and the journalist found them really capable of reconstructing the "acoustic room". He also made a bass test where he used a 40 Hz and a 100 Hz tone and drove the loudspeaker to a distorsion level of 10 % and then checked the output level at 1 m. The PM's had exactly the same level at both 40 and 100 Hz, and it was comparable in level with another loudspeaker in the test with 18" woofer. The PM's have really got a tight and clean bass responce and with a capability of playing very loud. You get that subwoofer feeling withoutrumble. The "imaging" is almost perfect because of the clean mid-bass and the homogenity between the drivers, which makes you "see" the whole recording room. Someone called the reproduction quality "seemless". This person also said that he never before had that feeling of "having the whole symphony orchestra in his room".
Publicado martes, julio 14, 2009 No hay comentarios:

The V1.0 is a CD player with a newly developed advanced electro-mechanical damping system (EMD). This will give you a more exact reading of the CD disk. The V1.0 is equipped with fully balanced XLR outputs meant to be used with preamplifiers with balanced inputs, such as the Abrahamsen V3.0.It has a volume control for the analog outputs, and a coaxial output that let you use it with other digital recorders and amplifiers.The V1.0 features a fully balanced 192 KHz Class A D/A converter with 24 bit upsampling and soft filter -3dB 80 KHz.The remote control is compatible with the rest of the products in the V-series.