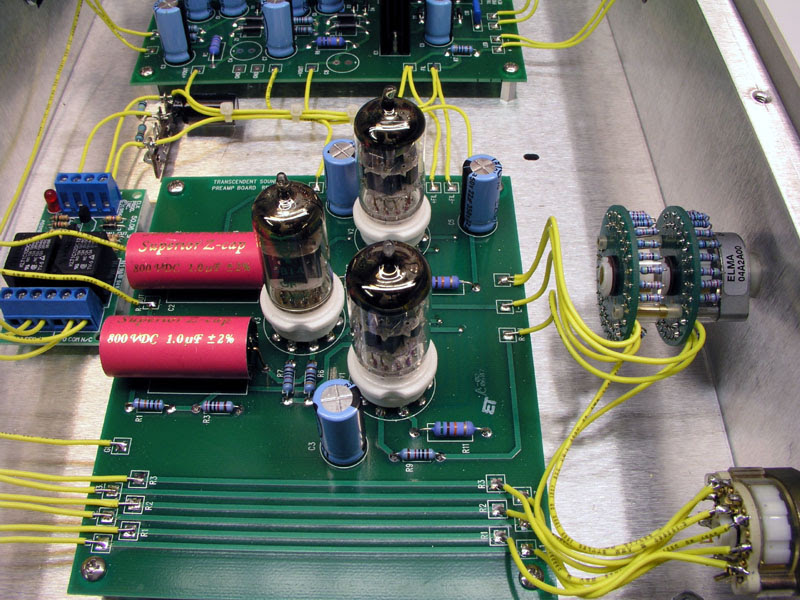 The potmeter following the kit was tried and immediately discarded and
replaced by the above 24 step attenuator.
Furthermore I had a 4 way ELMA selector on the shelf.
To the left the shorting circuit (delay) - a must have. 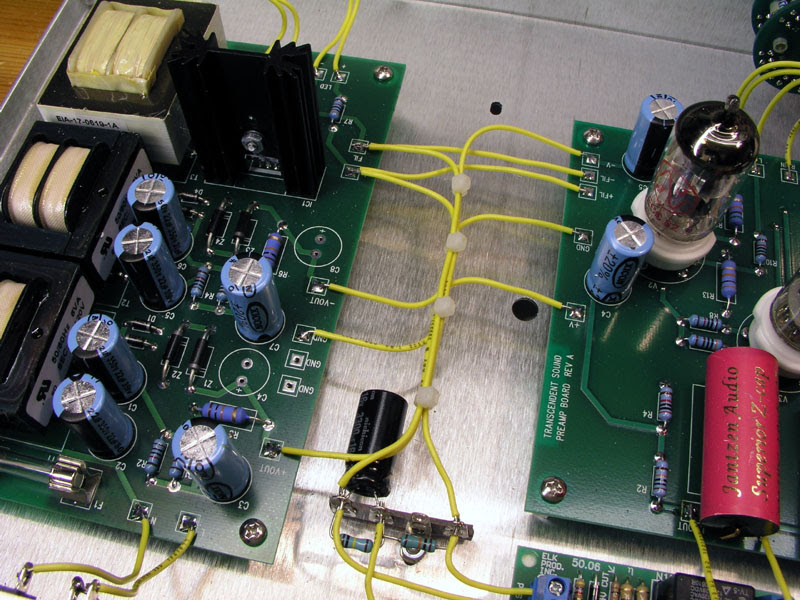 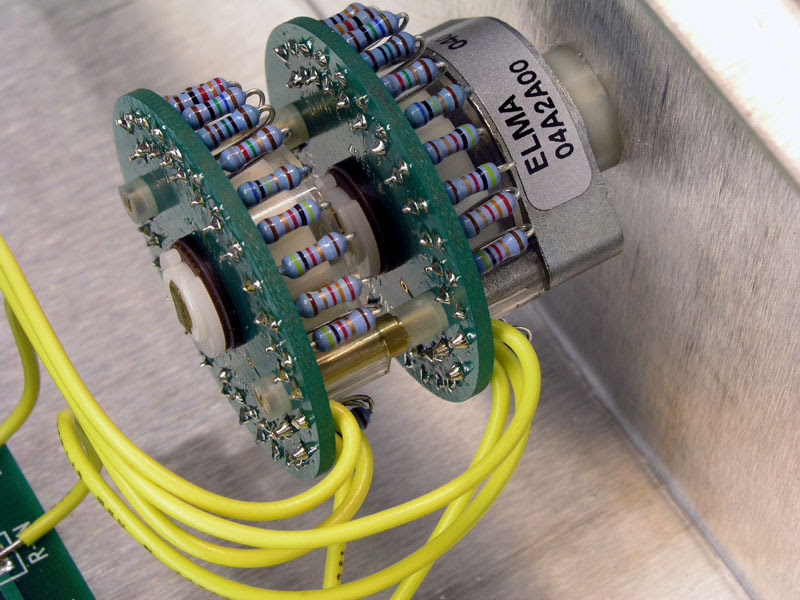 This attenuator is a gift!
Bruce says:
The attenuator starts with a maximum attenuation of -68 dB and then has 4 steps to -54 dB.
Each additional step is another -3 dB.  Other attenuators reach -54 dB in the first click.
The Transcendent Attenuator therefore provides much better low level control..
This is essential for use with high efficiency speakers.
- couldn't agree more! 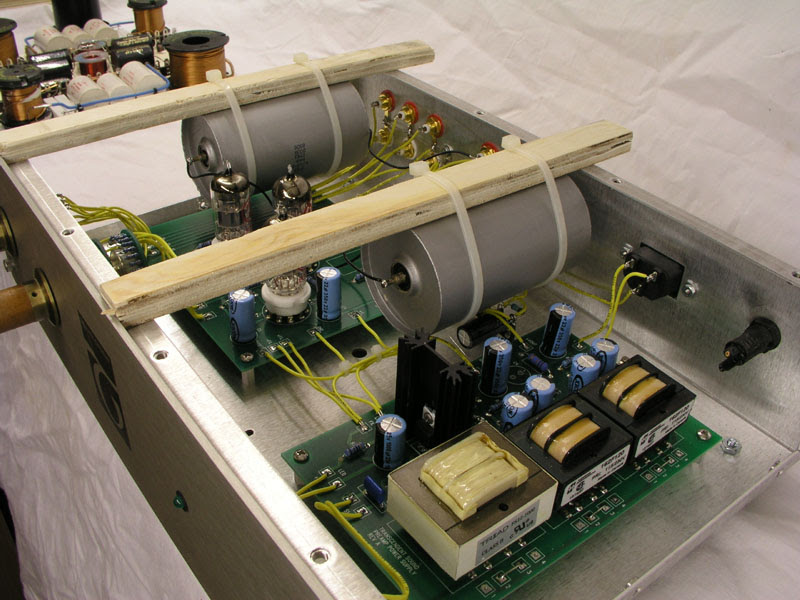 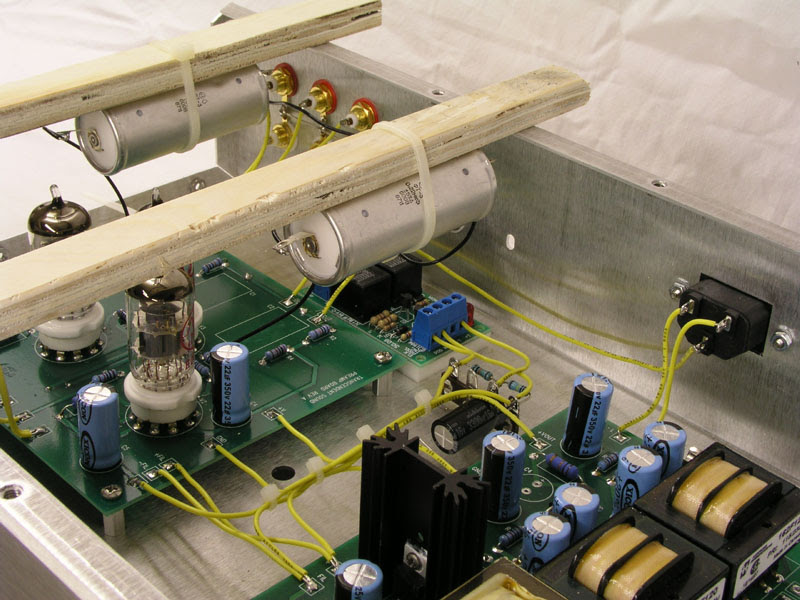 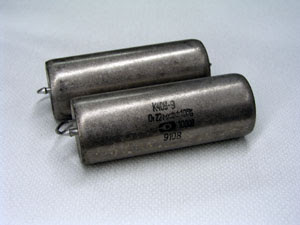 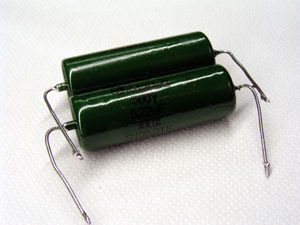 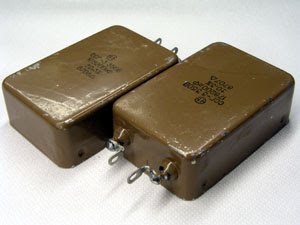 Left to right: Russian PIO, K40Y-9, 220 nF/1000V, Russian PIO (green), K42Y-2, 220 nF/500V, Russian Silver Mica: 178 nF/350 volts.
From SOVCOM I bought some more caps, just to know first hand what these Russian vintage caps can do. Initial plans were to test them in my 300B amp, but the GG preamp is a convenient amp for testing caps. The three caps seen above were all tested against the Mundorf Silver/Gold cabs and the PIO caps really aren't bad at all. Surprisingly good, actually. The Mundorfs may excell in overall resolution, but I might as well pick one of these two PIOs for smooth and balanced presentation. The Silver Micas are some chunky beasts and to cut a long story short, I might as well leave these caps in the GG for good. These cabs can be stripped from the metal case (magnetic) and put into some wooden containers filled with wax. I got two of these caps for 17 US $. Two 0.22 uF Mundorfs are ~82 US $.
The Final Mods 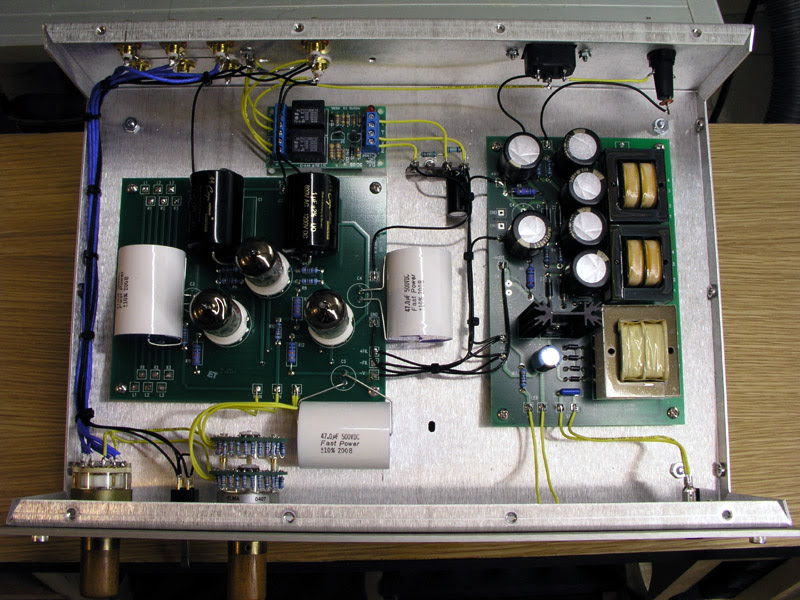 Black Gate caps in PSU section. 47 uF film de-coupling caps in amp section.
Silver coated copper wires in teflon sleeves. Mute switch.
I strongly believe it doesn't get much better than this. If you think you may have a better line stage, drop me a mail. The impact on sound from the latest mods is arguable, but possibly a slightly more easy-to-listen-to presentation - and it wasn't too expensive and for the benefit of the doubt.... As always the basic circuitry and coupling cap(s) is what has the greatest impact on sound.
Feb-09: I really shouldn't have made the statement above, because I've recently tried a TRAM w.o.t. line stage and driving the modded Audio Mirror mono-blocks, this amp beats the GG in the midrange. The TRAM from diy-hifi-supply/Hong Kong is no longer available, so I'll have to clone this line stage. I thought I was in for some years of peace on the line stage front, but apparently not....
The final-final mods 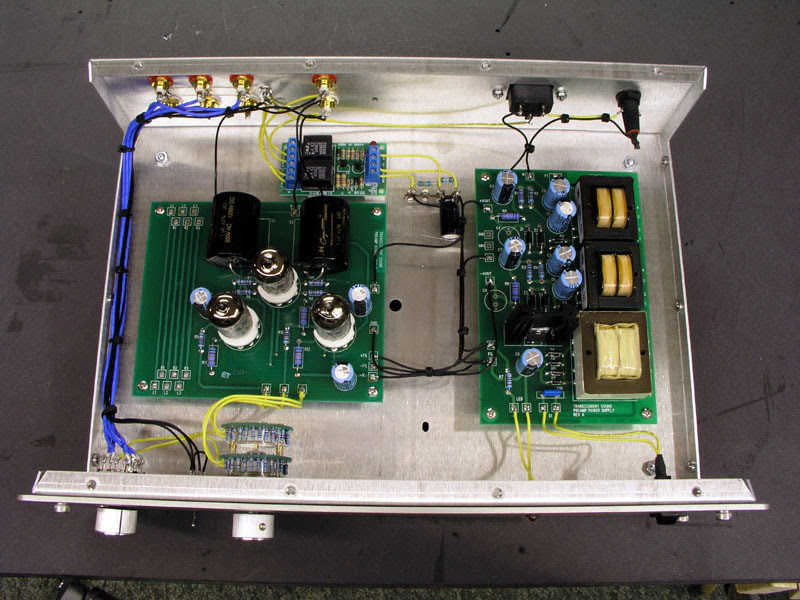 It's always a good thing to go back and see (hear) if the changes we make really are worth while. So, I re-installed all the original components - except the coupling caps - and to my ears, it didn't sound any different from all the Black Gate stuff. I've tried expensive caps for power supplies in other amps and always found the benefits to be small, if noticeable at all. The coupling caps are important, no doubt about it. This is where I would spend the money. Two good caps is all the GG needs - to my ears.
The expectation we build up when buying something, getting it home, installing it, setting it up again, etc., is a major psychological pressure. We so much want something to happen - and to hear our money well spent. And we're so good at fooling ourselves that we sometimes can hear whatever we want. Swapping back is an excellent exercise, although we rarely do - because it's a lot of work. So, above the GG today: The excellent attenuator from Transcendent and the two Mundorf silver/golds.
Publicado jueves, junio 06, 2013