“Thanks to all who recommended this product. I finally bit the bullet and bought a new one, I received yesterday. Shipped in 2 days. I spent the evening cleaning records. 1st current favorite album: Ricci playing Paganinis' Caprices in London. I have cleaned this album gently by hand before, so I didn't expect much of a difference. And boy was I wrong. It practically came alive. Ditto most of the better recordings. Now I'll have to clean all my xxx number of LPs, I'll be cleaning for the next year, I think. This does a far better job than my most careful hand cleaning and for the modest price. I would recommend it 100% to anyone who loves their LPs. Poof? I can't wait for the weekend - to clean albums!”

ALEXANDER'S GRAHAM BELL one of Pittsburgh's top singles spots featuring live entertainment and mobile DJ. Phil Schomer, who states “SPIN CLEAN record washing system is the only record cleaning system I'll use, because I found it to be the most effective in removing smoke firm and other dirt without a buildup of residue on my cartridge and records. Now my discs always sound new and crisp.”

STEREO MAGAZINE nationally recognized leader in stereo equipment publications stated “There's no question but that the SPIN CLEAN record washing system does remove surface dirt and fingerprints.” The reviewer went on to say “After processing a dozen or so discs the solution was clouded with minute bits of debris and discs themselves looked a lot cleaner, not only that a few of his children's collection which had been really dirty played a lot cleaner”. He stated “If one has some very dirty discs SPIN CLEAN record washing system is certainly one way to clean them.” 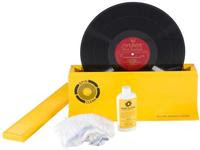 15 Reasons Why You Should Buy

"Beyond Compare in Record Care"

1 SPIN CLEAN is the only record washing system on the market that is a “bath type” complete record cleaning system.

2 SPIN CLEAN is the ultimate in record care, easy to use. Just spin the record two or three times in the SPIN CLEAN record washing system, remove and wipe dry with the special lint-free cloth. Presto, it's clean.

3 SPIN CLEAN leaves no residue on the record to build up and come off on your needle later.

4 SPIN CLEAN removes the static from your record as it is cleaned.

6 SPIN CLEAN is the only record washing system that has a special washer fluid that encapsulates the dirt and keeps the dirt suspended in the system instead of re-depositing it back onto the record.

8 SPIN CLEAN is the most economical way to clean any record, less than a penny a record.

9 SPIN CLEAN contains no alkalines, soap solutions or phosphates and is biodegradable.

10 SPIN CLEAN is safe to use, easy on your hands, and it works with hard or soft water and warm or cold water.

11 SPIN CLEAN does not leave any solutions on your record to evaporate and leave behind dirt deposits (you remove all the fluid when you dry the record).

12 SPIN CLEAN extends the life of your records by removing dirt, thus reducing needle wear and keeping your records “like new” improving their sound.

13 SPIN CLEAN was tested by a private laboratory and the results were remarkable. After SPIN CLEAN had been used output sensitivity was substantially increased and channel separation was improved. Also, amplified record noise was reduced. (An STR 100 test record was used. Test report furnished on request).

14 SPIN CLEAN has dual velvet brushes that gently and effectively remove dirt particles. No other system cleans both sides of the record at the same time.

15 SPIN CLEAN uses no electric or other costly power source. For a few minutes of your time and very little money, SPIN CLEAN will work for you. It's a sound investment to protect your investment in sound. No record collector can afford not to have the SPIN CLEAN record washing system. It makes a perfect gift everytime.